Our Sincere Sympathy to the Family of Raynard Rother 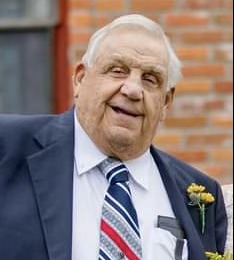 Raynard Norbert Rother, age 90 of Welch, died Sunday, November 7, 2021, at Deer Crest Assisted Living.  He was born May 6, 1931, in New Trier, to Edward and Cecelia (Schaffer) Rother.  He attended school at St. Mary’s in New Trier and then started farming with his family, which would become his lifelong career. On November 22, 1952 he was united in marriage to Mary Ann Dalaska at St. John’s The Baptist in Vermillion.  Together they had a farm in Welch, where they raised their eight children, who all helped out on the farm and at home.  Raynard stayed active in his younger years, snowmobiling, bowling and fishing. He enjoyed his card club and was always up for a game of euchre, crazy 8’s or 500. He had a sweet tooth for ice cream and sweet spot for kids and babies and could be known to tease them once in a while.  Raynard will be remembered for always having a smile on his face and you could often find him in Welch enjoying a hot breakfast or at King’s in Miesville, visiting and catching up with his neighborhood friends, while sipping on a whiskey water every now and then.  He was a long-time member of St. Joseph Catholic Church in Miesville where he was a former Trustee.

Funeral Mass will be 10:30 a.m. Monday, November 15, 2021 at St. Joseph Catholic Church in Miesville with Father James Notebaart officiating.  Burial will take place at the church cemetery.  Visitation will be 4 p.m. to 7 p.m. Sunday, November 14 at the Church and one hour prior to the service on Monday.  Memorials are preferred to the church or donor’s choice.  Arrangements are being handled by Mahn Family Funeral Home, Bodelson-Mahn Chapel.  Online condolences can be left for the family at www.mahnfamilyfuneralhome.com